We did it! We actually built what we set out to do.

So my friend who grew up on a farm, and loves to garden, had never tried to grow herbs. She said she never found reason enough, but I beg to differ, having seen the small containers of grocery-store bought dried herbs in her kitchen cabinet. I, on the other hand, have been growing herbs for over a decade, in pots that fit the edges of the deck just outside my kitchen. She manages a pretty decent size urban garden in her backyard, from which I have enjoyed many years of pickin — from tomatoes and peppers, to a variety of greens and beans.

A couple of days ago, we joined forces, along with the help of a another friend, and decided to bring a larger variety and abundance of herbs to the garden. But instead of adding a row to the ground — with space already promised to the likes of broccoli, onions, lettuce and tomatoes — we decided to build a shelf, positioned next to the storage shed already located near the garden.

So why would I be sharing about a new garden shelf here? Because we did it for almost FREE!

As we begin to talk through how we wanted it to look, our confidence grew And rather than make a standing shelf — the kind most people can find at discount stores, we decided why not make it a hanging shelf!

We started with the notion that we were going to make it ourselves, without any written plans; first promising to check our OCD at the door. That last part lasted for only the first hour, but the process was still a lot of fun! 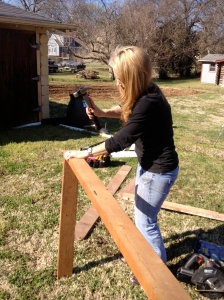 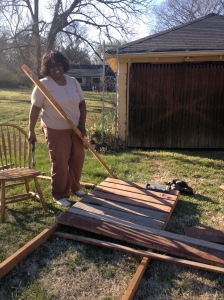 The wood was free; discarded leftovers from a porch previously torn down by someone else. The screen was from a former project that was no longer being used. And the idea was something that developed only after we began cutting, hammering, and putting together what was in our heads, turning it into reality as we built.

Our costs came down to the chains and eye hooks to hold the “hanging shelf” in place. Everything else was sheer “women power,” and creativity. And what a blast we had!

So don’t be afraid to try something new. If you’ve got stuff just hanging around the house. Use your imagination and create something useful. Don’t spend your money buying stuff other people put together at a factory on the other side of the world.

Use what you got. Build what you want!