As I slathered more lotion on my hands, having lost track of just how many times I’ve washed them, I took stock of what was left of my soap and lotion, surprised by just how much I’d gone through over the past four weeks.

I can’t believe just how many times I’ve lathered on the soap, smoothed on the hand lotion, and the number of candles I’ve lit in just one month’s time; since the start of the Safer at Home mandate where I live. When you’ve spent most of your waking hours away from home five days a week, most of your hand washing takes place at work or occasionally a restaurant. But thank goodness I took advantage of my favorite store’s semi-annual sale back in January, and had already stocked up on some of my favorite scents. Back in December I received several candles as gifts, and have been burning through them during this extended time at home.

With the heighten awareness — perhaps even fear — of not infecting myself with an uber contagious and nasty virus while doing anything from a quick run to the grocery store (if I remove my gloves before I open the car door to avoid cross-contamination, then what about having to touch the grocery bags to put them in the car? But wait, now the virus may have transferred on to my car seats; and I still have to get the bags out of the car and into the house!); to a trip the mailbox (use a paper towel to open the mailbox; grab the mail; toss it on the floor by the door; throw away paper towel, wait a full 24-hours before opening mail; dump contents onto the chair;  immediately discard the envelopes and wash hands. Go through the actual contents of the mail. Wash hands again “just in case!”).

I’ve always been a pretty good hand washer. One need only to be in a public restroom, at work and otherwise, to soon learn that not everyone apparently takes personal hygiene as personal as you do. So the old grab a paper towel to use on the door handle exiting the restroom is nothing new for me. What IS new for me is noting how many times I touch my face after touching something else that was handled by someone else. Before the COVID-19 “quarantine” as we like to call it, that was everything from opening the door to enter and exit my classrooms, working on the shared computers in each classroom, using the copier in the faculty room; picking up an ink pen to sign paperwork in the Chair’s office, and even opening or discarding my mail that had traveled from wherever it came, to the campus post office, to the on-campus postal carrier, to the Department office, into the hands of the student worker or secretary who placed it into my mailbox.

Isn’t it weird how we never really thought about some of the things like that; even during cold and flu season?

We were on spring break when the “stop everything and re-do all your curriculum to transition from the brick and mortar classroom, to an online community,” directive came down from our university president. The wording was much softer than that, but it nonetheless, came with a firm deadline. The students would receive an extra week of spring break; while faculty would have that week to completely shift everything, including projects and deadlines, and what would have been hands on student-to-student assignments, from the on-the-ground school system to remote access learning.

In the middle of all that, one of the first things I thought about was the “What Ifs?” My “what ifs” were not built on fear, but rather learned from the history of what happens when people are prepared versus when people are not prepared when emergencies happen.

Watch for the signs!

Before there was NOAA (National Oceanic and Atmospheric Administration) or the Weather Channel, people relied on warning signs from nature (wildlife, plants, and the ocean), to prepare for what might be coming weeks or even months later (a bad winter, a dry spring, etc.). Except for perhaps many farmers, most of us wait to be told what to do.

Twice a year, when we change our clocks for Daylight Savings Time, there are a number of public service announcements reminding people to change the batteries in our home smoke detectors. Why? Because most people will forget or ignore the need. And the time to find out that the batteries are dead is not in the middle of a fire, when they don’t go off while you and your family are sleeping.

During our earlier than usual spring break, I had time to watch more television than normal. As I did, I started not just hearing about, but seeing images from other countries, of what this coronavirus was doing; people it was impacting; the way it was spreading, and some of the drastic ways some countries were trying to deal with it. And I thought, “what if that happens over here? What if the virus starts to spread in certain parts of the country at such an alarming rate like what I was seeing?”

So when I got the university email, I thought, what is it that the school systems know that we’re not hearing yet? It was a bold and costly move for most colleges to switch to online learning; supported by the purchase of licenses and software the schools had not been prepared to financially invest in. And what did those western state Governors see that we hadn’t yet; knowing that their actions would result in a huge economic hit to their state?

Turns out their quick response may have saved hundreds or even thousands of lives.

There wasn’t an answer. And certainly nothing I could do about whether or not the U.S. would experience the fate of Asia, and at that time, a growing part of Europe. But reading the signs, I decided to take inventory of what was in my house (pantry, cabinets, refrigerator) and started shopping for necessities. Having just gotten over a really bad cold less than two weeks earlier, my first thought was buying cleaning and sanitizing  items. I originally purchased a large can of Lysol and disinfecting wipes to use in my office and classrooms, even before spring break. But once the dynamics started to change, I knew there were additional items I needed to make sure I had. And so I shopped! Bleach, Clorox wipes, non-perishable pantry and freezer items; fresh produce, and yes, toilet paper! While at an already scheduled doctor’s appointment, I asked my doctor to write my medicine refill for 90-days instead of the 30.

In other words. I started preparing. Days before the first wave of panic buying, and over a week before the president declared a National Emergency, I had already stocked up on the items I predicted I would need in an emergency that had an undetermined length of stay. Unlike a blizzard that passes in hours or a hurricane that moves on a day or two later, we had (and still have) no idea how long and to what extent this COVID-19 would impact us. And in a case like that, I would rather over-prepare and not need, than to under prepare and not have something I need.

To be clear, stocking up to prepare for an emergency is not the same thing as hoarding items you neither need, nor plan to use (especially evil hoarders whose entire intent from the beginning is to resale for profit). Stocking your house of the essentials needed is smart, and what everyone should do regardless of whether there’s a severe winter storm or a superbug headed your way. 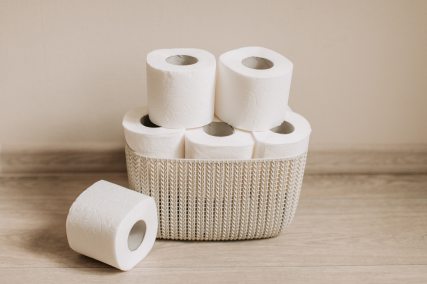 As I watched and listened to some people on social media a week and two later, complaining about not being able to find basic items like eggs, meat, and of course, toilet paper, some of their posts were angry rants about how inconsiderate other people were that they couldn’t get what they wanted/needed now. And I thought, yes, there were definitely people over buying, and perhaps a number of hoarders as well. But the other truth of the matter is that we all had access to the same information; the same sighs (some would say warning bells) were visible and audibly to everyone. Yet, some waited. Some dismissed it. While others chose to heed it.

I definitely understand that not everyone has the luxury of being able to shop early (ahead of a paycheck) or shop for extras (even after a pay day). I have been one of those people more than once; including in the midst of the last recession 10+ years ago. They are the ones who have every right to feel frustrated.

But for many others, their unwillingness to act (like a coastal shop owner refusing to board up their business, in spite of the hurricane warnings that come days in advance of making landfall), they need to ask themselves how might they do things differently the next time. Because by all scientific accounts, there will be a next time; perhaps a lot sooner than any of us would like.

How prepared will you be?

Marketing With A Story