Don’t let the word “shopping” fool you! I’m not advocating going out and spending a lot of money this Christmas season. Quite the opposite. Because I’ve never quite understood why people will run up their credit cards to buy lots of things for many people who either don’t need what you’re buying for them, or would have loved a lesser priced gift from you. And for those with higher expectations, including family members, you have to ask yourself what do they value more — the monetary amount of a gift you can barely afford, or spending time together with an understanding that the holiday season isn’t a license to go further into debt, as so many Americans do!

I recently shared on the Catching Raindrops Facebook page that twice in the last three weeks Thorntons Gas has dropped a six cents off fuel rewards on my card. Both times it happened the day I needed to gas up! Just the other day, another one appeared. I may not need to gas up yet, but topping off my half tank before it expires tomorrow will still be beneficial! Last month I got a free cup of coffee from there as well. Then there was two weeks ago when I got a coupon from Kirkland’s for ten dollars! What great timing, because I need a new pair of gloves. I would never have thought to go there for clothing items, but just this morning, an email of sale items appeared? Not only were gloves listed on sale for FIVE DOLLARS, but so was a pair of women’s slippers, which I also need. So I’ll be getting two more things I need — for FREE! That’s MY kind of shopping.

Earlier this month I hit up Bath & Body Works and their $4.95 sale on aromatherapy products (these items are regularly $12.00-$15.00; and more), and was glad to be able to use my buy one get one free coupon which I’d been holding on to for the right moment. So YES, I got TWO aromatherapy products (i.e. Christmas gifts) that would have cost me over $25.00, instead for just $4.95!

And at Cost Plus World Market, after some “smart shopping” purchasing several bags of coffee for friends during their buy one get one free sale, I ended up earning another free BAG of coffee on my account for myself! But that wasn’t the end of my World Market venture. While there, I noticed an in-store treasure hunt, in search of the Golden Llama. I was too late for that day, but four days later, I decided to show up when the store opened. Yeah, there were about six other women with the same idea, but as the door opened, with the clue of the Llama being seen near something green, I decided to try my luck. While most of the ladies started near the front of the store, I headed straight to the back, looking at everything green. I found one! What started off as a silly game and marketing ploy, of course, won me TWENTY DOLLARS in shopping money! Okay, I admit I wish it had been one of the $50 or $100 rewards, but $20 was better than nothing! And apparently FREE money counts because later that day I had earned a TEN DOLLAR coupon to use later! 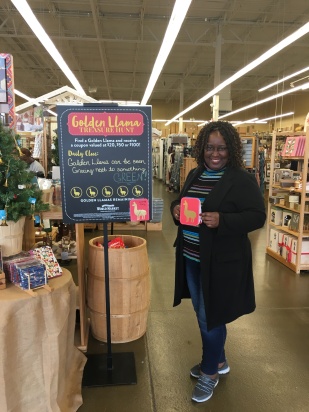 So why am I sharing all of this. Well, I’ve talked often about the benefits of joining Rewards programs before. Times like these are when I like sharing specific benefits to these programs. They’re free to join and you get rewarded for doing what you already do — shopping, getting gas, etc. I don’t join programs for places I don’t already visit. But getting rewarded — in other words, saving money — for engaging places I go to anyway makes perfect financial sense! It’s the very essence of catching raindrops in water buckets!