I have a friend who loves to garden.  Most of what she grows is intended to give away to others. I’ve never been one to enjoy working in the sun; being eaten up by insects, with sweat dripping in my eyes, and dirt gathering under my finger nails. None of that seems to bother her. She gets a lot of joy out of having a garden full of vegetables, bordered by sunflowers on one side, and zinnias on the other; “to give the birds something else to eat,” she insists. 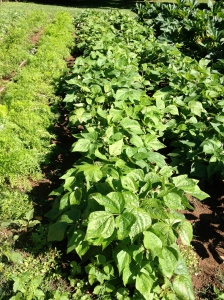 Gardening takes a lot of hard work and is time-consuming. That’s why I’m sometimes humorously surprised at how impatient she can get at times. When some vegetables start to slow their growth, she’s ready to pull them out of the garden and plant something else. If others are off to a slow start, she re-tills the area and plants something else. But this summer, she learned a lesson about being patient. It was an accidental lesson, but maybe it’ll spill over into how she handles things in the future.

Two weeks ago, when her eggplant bush didn’t have any new blooms, and only one piece of fruit hanging, she was ready to yank it out of the ground. Time, and other commitments kept her from doing it. And then came the rains. Not just some rain, but days of rain. A week later, there were multiple blooms on that bush. Then a week after that — egg plants. Not just one or two, but a half dozen of the fruit had appeared. When I took note of it, I asked, “wasn’t this the bush you were going to pull up a couple of weeks ago?” 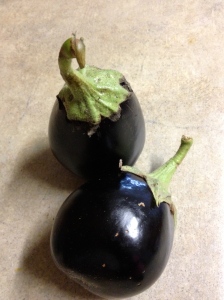 You see, even though it was still early in the growing season, the fact that because she didn’t see continued evidence of fruit, she was ready to pull it out and throw it away. But all it took was a few days of a good soaking rain to yield the kind of results she was looking for. Not only did she have the visible fruit, but there were more blooms waiting to become future eggplants as well.

Patience, albeit, not planned by her, but as a result of being forced to wait for the rain to end, was worth the wait.

How often are we so ready to throw in the towel on something, because we get tired of waiting for it to happen? When instead, a little patience is all we need. And at times, we get way more than we were waiting for in the first place.

That happened to me recently. I’d been meaning to get some new profile shots for work, and for my various online platforms. But I never found a good photographer who also had the kind of pricing that I was interested in paying, and who was available at the same time I was. At one time, I thought I had found someone, but he wasn’t flexible in any way — not on price or poses or number of photos that would be mine. And because he never added me to his emailing list, I never found out when he would run a special until oftentimes just days before it ended. I’m not a vain person, but I also want to make sure that if I’m going to spend money for a photo shoot, that I have my hair done, and the right clothes for the image I want portrayed.

Once, he finally ran a special I could get behind. His special was for a specific price for two people. It was a “Friends” promo. Since I didn’t know anyone who wanted a photo shoot done during the same time period, I tried to get him to agree to take just me — even offering to pay the same price that his promo was advertising. But he insisted on it being the two people for that one price. I’m assuming it was because he wanted that second person through the doors of his studio. But what he got instead was not getting the first person — ME — to his studio at all. I marked him off the list, and told the friend who referred him to me, that her guy would never grow his business into anything significant with the way he did business.

Just weeks after I’d missed another one of his “specials,” an email popped in my inbox. A women’s organization I was a member of was offering profile pictures for their membership. I did a double-take looking at the pricing. A photographer who was also a member of our organization, had agreed to do the photo shoots for an incredibly discounted price. I kept waiting for the catch — like not being able to have full use of the photos, or something else. But that wasn’t the case. If I was willing to wait another six weeks for it, I’d have the opportunity to get what I was looking for — multiple poses, multiple choices, and full use of the chosen shots!

My patience had paid off in more ways than one. I had plenty of notice. I was able to make the proper arrangements to take advantage of it. I was going to get a number of shots to choose from…AND I was only paying about 1/6th the price of the other guy’s going rate; and less than a third of the amount he ran for his specials!

Patience was Worth the Wait!

Me, hanging out and having some fun shortly after the shoot!

3 thoughts on “Why Patience is Worth the Wait”

Enjoyed speaking at yesterday’s NEXTGEN NAMM session “First Steps in the Music Industry: From Internships to Jobs!” Doing it again today! #namm2020 #mtsu #mtsurecordingindustry #collegestudents #musicbusiness #nextgen
You know it’s the Holiday Season when... #nutcracker #nutcrackerballet #christmas #friendship
Christmas dinner with longtime and forever friends!
Spending Friday night enjoying a dinner theater with a friend! #singingintherain #dinnertheater
One thing I love about teaching is helping students take what they’re learning in the classroom and applying it to real opportunities. Tonight was one of two showcases with student artists booked by students in my Talent Agency class, with sound and lights provided by the students in the Sound Reinforcement class at our new on-campus venue! #chrisyoungcafe #mtsurimlive #experientiallearning

This Just In
Trusting the Process